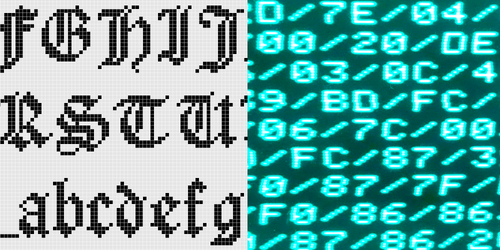 Find out the different ways letterforms have been produced and how technology for print and for the screen eventually became the same thing.

This Letterform Lecture will take you on a whirlwind tour of bitmaps, cathode rays, and how type and computer technology have evolved together. This talk is part how-it-works and where-it-came-from, and part love letter to what is inevitably lost to obsolescence.

While print has often been the ultimate goal of "digital" typography, there is a parallel story of type shown on screens – letters conjured up and discarded in real time. This talk will touch on the different ways letterforms have been produced on displays, and how technology for print and technology for the screen eventually became the same thing. Fun topics include: the unique cathode ray aesthetic; the design of bitmap fonts; arcade and other games; how Bézier curves work; and tricks used to make small text legible.

Letterform Lectures are a public aspect of the Type West postgraduate program. The series is co-presented by the San Francisco Public Library, where events are free and open to all.

Freedom in Restriction: My Journey with Kufi